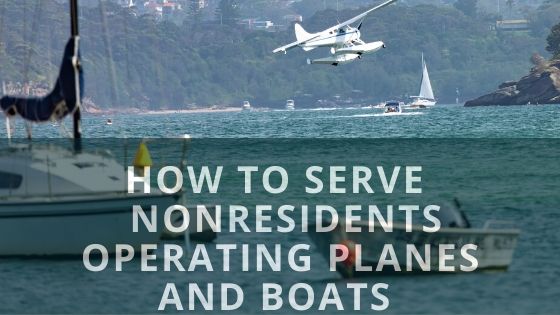 So far in this series, we’ve seen quite a laundry list of different circumstances and conditions under which process can be served, and the manner in which it must be served depending upon the intended recipient. The further down in the list of statutes we go the more specialized the service of process has become; this entry is still under the heading of service on nonresidents, but specifically, those who operate aircraft or watercraft in the state. To avoid repetition, let’s make the following clarifications upfront:

If you are a nonresident in this state who is operating, navigating or performing maintenance on any aircraft or watercraft, and process is to be served on you, then the Secretary of State is, by default, your statutory agent and process will be served in such a way if that aircraft or watercraft was involved in an accident or collision. Part of the agreement made by the nonresident owner of the craft is that any process served on the Secretary of State in this manner will be as legally binding as though it had been served on them personally.