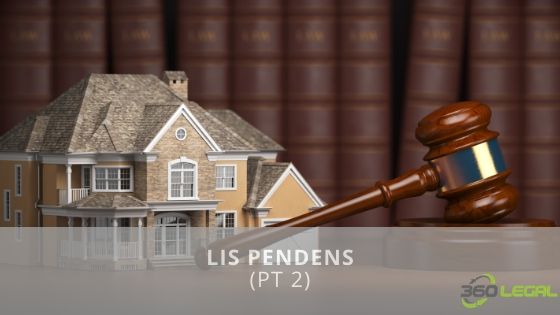 Okay, so what information does a notice of lis pendens have to include? It’s got to have all of the following in order to have any legal legs:

Except for the interest of the party in the possession of the property or cases involving easements, a lis pendens will put a temporary freeze on enforcement of any liens (including federal tax liens) against that property if they weren’t recorded prior to the lis penden. The exception to this is if the lienholder makes a motion for intervention within 30 days and the court grants the motion.

A notice of lis pendens is not without its limits. It is valid for one year from the date it was filed unless it is determined that there is sufficient good cause for an extension and it is granted by the court. Also, if it is found that the pending pleading was improperly recorded, or if the property in question is no longer affected, that too will cause the lis pendens to no longer be in effect.

(1)(a) An action in any of the state or federal courts in this state operates as a lis pendens on any real or personal property involved therein or to be affected thereby only if a notice of lis pendens is recorded in the official records of the county where the property is located and such notice has not expired pursuant to subsection (2) or been withdrawn or discharged.

1(b)1. An action that is filed for specific performance or that is not based on a duly recorded instrument has no effect, except as between the parties to the proceeding, on the title to, or on any lien upon, the real or personal property unless a notice of lis pendens has been recorded and has not expired or been withdrawn or discharged.

2. Any person acquiring for value an interest in, or lien upon, the real or personal property during the pendency of an action described in subparagraph 1., other than a party to the proceeding or the legal successor by operation of law, or personal representative, heir, or devisee of a deceased party to the proceeding, shall take such interest or lien exempt from all claims against the property that were filed in such action by the party who failed to record a notice of lis pendens or whose notice expired or was withdrawn or discharged, and from any judgment entered in the proceeding, notwithstanding the provisions of s. 695.01, as if such person had no actual or constructive notice of the proceeding or of the claims made therein or the documents forming the causes of action against the property in the proceeding.

(c)1. A notice of lis pendens must contain the following:

a. The names of the parties.

c. The name of the court in which it is pending.

d. A description of the property involved or to be affected.

e. A statement of the relief sought as to the property.

2. In the case of any notice of lis pendens filed on the same date as the pleading upon which the notice is based, the clerk’s notation of the date of receipt on the notice shall satisfy the requirement that the notice contain the date of the institution of the action.

(2) A notice of lis pendens is not effectual for any purpose beyond 1 year from the commencement of the action and will expire at that time, unless the relief sought is disclosed by the pending pleading to be founded on a duly recorded instrument or on a lien claimed under part I of chapter 713 against the property involved, except when the court extends the time of expiration on reasonable notice and for good cause. The court may impose such terms for the extension of time as justice requires.

(3) When the pending pleading does not show that the action is founded on a duly recorded instrument or on a lien claimed under part I of chapter 713 or when the action no longer affects the subject property, the court shall control and discharge the recorded notice of lis pendens as the court would grant and dissolve injunctions.

(4) This section applies to all actions now or hereafter pending in any state or federal courts in this state, but the period of time specified in subsection (2) does not include the period of pendency of any action in an appellate court.