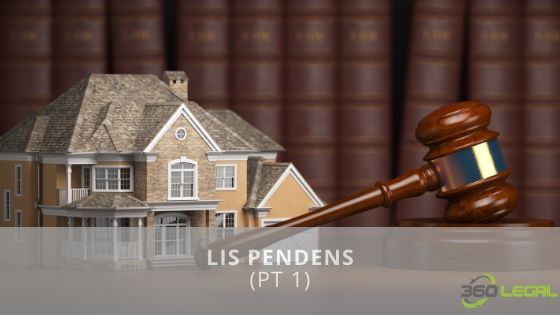 When it comes to service of process there is a specialized type of this action known as lis pendens (Latin for ‘suit pending’) which deals specifically when claims to ownership of real or personal property are in question. One thing that needs to be made clear upfront is that in order for legal action to be considered lis pendens, a valid, active notice has to be on record in the Florida court system. Until that is done the rest is strictly academic; if it has not been filed, any action that is to be considered lis pendens will have no effect.

From here the statute delves deeper and becomes even more specific. If some party who is not already an active participant in the case acquires a financial interest in the property in question while the action is in progress they will be exempt from all claims against that property if proper list pendens notice has not been filed with the courts (or if the notice expires or is withdrawn). They will also be exempt from any action taken against the property – ti would be as if they were never notified of the lis pendens standing at all.

Let’s take a break here and continue with the remainder of the statute, covering what is needed on the list pendens and what its limitations are in the next article of the series.

(1)(a) An action in any of the state or federal courts in this state operates as a lis pendens on any real or personal property involved therein or to be affected thereby only if a notice of lis pendens is recorded in the official records of the county where the property is located and such notice has not expired pursuant to subsection (2) or been withdrawn or discharged.

1(b)1. An action that is filed for specific performance or that is not based on a duly recorded instrument has no effect, except as between the parties to the proceeding, on the title to, or on any lien upon, the real or personal property unless a notice of lis pendens has been recorded and has not expired or been withdrawn or discharged.

2. Any person acquiring for value an interest in, or lien upon, the real or personal property during the pendency of an action described in subparagraph 1., other than a party to the proceeding or the legal successor by operation of law, or personal representative, heir, or devisee of a deceased party to the proceeding, shall take such interest or lien exempt from all claims against the property that were filed in such action by the party who failed to record a notice of lis pendens or whose notice expired or was withdrawn or discharged, and from any judgment entered in the proceeding, notwithstanding the provisions of s. 695.01, as if such person had no actual or constructive notice of the proceeding or of the claims made therein or the documents forming the causes of action against the property in the proceeding.

(c)1. A notice of lis pendens must contain the following:

a. The names of the parties.

c. The name of the court in which it is pending.

d. A description of the property involved or to be affected.

e. A statement of the relief sought as to the property.

2. In the case of any notice of lis pendens filed on the same date as the pleading upon which the notice is based, the clerk’s notation of the date of receipt on the notice shall satisfy the requirement that the notice contain the date of the institution of the action.

(2) A notice of lis pendens is not effectual for any purpose beyond 1 year from the commencement of the action and will expire at that time, unless the relief sought is disclosed by the pending pleading to be founded on a duly recorded instrument or on a lien claimed under part I of chapter 713 against the property involved, except when the court extends the time of expiration on reasonable notice and for good cause. The court may impose such terms for the extension of time as justice requires.

(3) When the pending pleading does not show that the action is founded on a duly recorded instrument or on a lien claimed under part I of chapter 713 or when the action no longer affects the subject property, the court shall control and discharge the recorded notice of lis pendens as the court would grant and dissolve injunctions.

(4) This section applies to all actions now or hereafter pending in any state or federal courts in this state, but the period of time specified in subsection (2) does not include the period of pendency of any action in an appellate court.